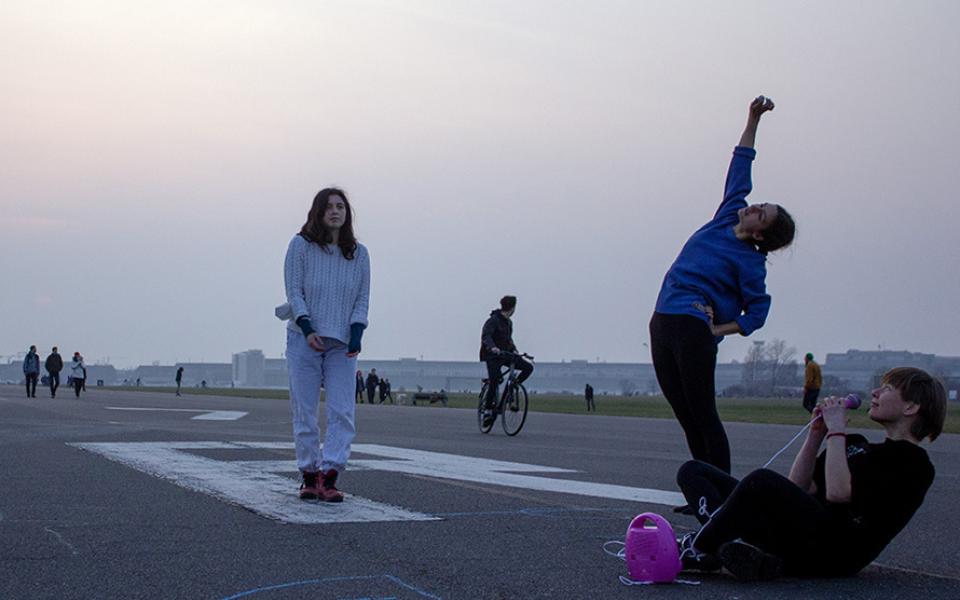 Inbetween is located in the present tense, it is present between the past and the future: intermediate time. Inbetween is a threshold that requires some effort to step over. In alternating roles as a poet, a dancer, and a blind artist on Tempelhof Field, O-Ton temporarily embodies the opportunity to connect in distance and difference, to give expression to feelings and to be surprised, and moved – even in digital space.

The O-Ton Kollektiv emerged from the short film shooting of "Zerbrechliche Spaßverderberinnen". Based on poetic texts by Sarah Ahmed and Suely Rolnick, they performed for the film in public space.

This time O-Ton use their own poems, observations and interviews on the Tempelhofer Feld and open up a lively possibility of expression and encounter in public space.

Aymara von Borries Bisbicus loves to dance and move all her life. She studies culture and social anthropology as well as theater studies at the FU. Most recently she performed in "Walking Project, from walking and hoping" - Jo Parkes& Ensemble.

Elisabeth Lehmann is a studied actress and currently initiates movement research on relationships between body and landscape. Next to the O-Ton Kollektiv she is part of the newly founded Consortium - artistic research association on needs-oriented, appreciative economy. She loves theater as a space of possibility in overlapping contexts. Last year she received a grant from Draußenstadt Kultur to revitalize the play street at Lausitzer Platz.

Anna Gottschalk is a visual artist and graphic designer. She enjoyed 10 years of ballet training under the direction of Irmhild Kaufer and danced at the Komische Oper. After a break and longing for dance, she is again seeking connection between body and mind in the collective.

Christian Kosfeld is a photographer, specializing in architecture. With the O-Ton Kollektiv he seeks new perspectives on body and space.